Brand-name drug companies could put off introducing new medicine in Canada and scale back research here if the country makes a major shift to cheaper generic alternatives under a national pharmacare plan, according to an internal federal analysis.

The concerns were included last year in a briefing document for federal Finance Minister Bill Morneau that explored the feasibility and costs of a pharmacare program.

Pharmacare is shaping up as a key campaign issue in the October election, particularly for the Liberals.

The Finance Department’s analysis was created a few days before Morneau’s 2018 budget officially launched an advisory group on Canada-wide pharmacare, which the Liberals say will cut costs and improve Canadians’ access to prescription drugs.

The document said more information is needed to fully understand how national pharmacare would affect drug spending in Canada — and what it would mean for revenues and business operations for the domestic pharmaceutical industry.

In its look at the Canadian industry, the briefing note to Morneau said national pharmacare could influence the revenues of drug companies in several ways. Among the possibilities, it said a shift in favour of more generic drugs, mass-produced after patent protections for new medications expire, could lower costs.

But that could come with a cost for patients.

“For example, brand-name pharmaceutical companies may respond to a broad shift to generic drugs by delaying the introduction of new drugs in the Canadian market or by reducing the R&D activities that they undertake in the country,” said the analysis, labelled “secret,” which was obtained by The Canadian Press under access-to-information law.

“Innovative Medicines Canada, which represents pharmaceutical patent holders, has warned that a national pharmacare program focused on cost containment may result in reduced access to medicines for Canadians.”

The president of Innovative Medicines Canada said her members, which include multinational drug companies, fully support the role of generics. Some of the firms produce generic drugs as well, Pamela Fralick said in an interview.

In late 2017, the Liberal government proposed changes to the regulations governing patented medicines as a way to drive down drug prices. The update, which has yet to be put into force, would be the first major change to those rules in more than two decades. 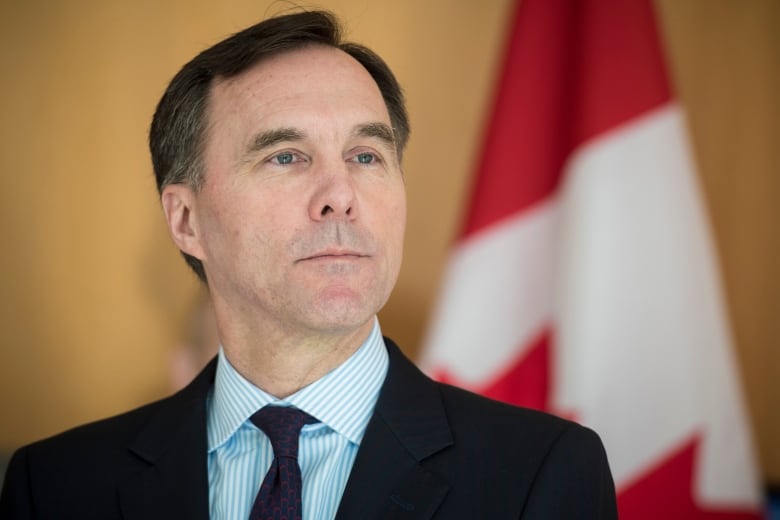 Bill Morneau, Minister of Finance, listens to questions asked by the media during a press conference on the national pharmacare program at the Li Ka Shing Knowledge Institute in Toronto on Wednesday, March 6, 2019. (Tijana Martin/Canadian Press)

The proposal calls for an expanded list of countries Canada can use when comparing patented drug prices. It also includes new factors for the Patented Medicine Prices Review Board, a quasi-judicial body operating at arm’s length from the government, to take into consideration when assessing whether a drug is overpriced.

Fralick argued that the proposed reforms need improvement. It they proceed as written, she said companies could suffer a hit to their bottom lines of between 30 and 70 per cent.

“[They’re] making drug-launch decisions, investment decisions, et cetera, based on what happens to this particular environment.”

With all the uncertainty, companies have been holding back on bringing investment to Canada until the regulatory environment has been settled, Fralick added.

Beyond the risk of missing out on investment dollars, she said if unfriendly conditions encourage companies to look elsewhere, new drugs could be delayed years before they get to Canada.

The briefing to Morneau said research and development investments by pharma companies in Canada already “significantly lag” spending in other countries in the Organization for Economic Co-operation and Development, a group of 34 countries with advanced economies.

The ratio of sales to research and development for all patentees fell again in 2017, to 4.1 per cent. That’s a decrease of 65 per cent since its high point of 11.7 per cent in 1995, according to numbers from the price-review board. The industry invested $870 million in 2017 and employed 29,870 people, said the board.

“Since 2003, industry investment in R&D has been less than 10 per cent of sales — the target that the pharmaceutical industry committed to in exchange for more favourable patent terms in Canada,” said the briefing to Morneau.

Fralick disputed the argument that innovative drug companies have been falling short on investment. The PMPRB formula doesn’t capture major industry investments in university research chairs and through venture-capital channels, she said.

“There’s just a whole range of research going on in Canada that is not being counted,” she said, insisting that many of her members are “well above” the 10-per-cent target. “It’s unfortunate, there is a bit of tension right now with the industry right now.”

The cost of national pharmacare is expected to be steep.

An analysis by the parliamentary budget officer estimated a broad coverage regime would carry a $20-billion-a-year price tag. Recent work by the Canadian Institute for Health Information found that Canadians spent $39.8 billion on drugs in 2018, about $33.7 billion of it on prescription medication.

Philippines halts visas on arrival for Chinese on virus fears