Jillian Bearden, 39, runs through a series of tests in a lab in Colorado Springs, Colo. This is the third time she has been tested, the second time since she transitioned. (Briar Stewart/CBC)

A Canadian-born researcher is helping to launch the first substantial study of transgender athletes in a bid to better understand how transitioning and hormone therapy affects athletic performance.

The issue of how to include transgender women in competition is centred around rules, rights and biological differences.

And the debate about what constitutes an unfair advantage is heated, which is why medical physicist Joanna Harper hopes science can steer the conversation.

“Until we have several of these larger-scale studies done worldwide, it’s hard to be truly definitive on anything,” she said.

Harper, who is also an adviser to the International Olympic Committee (IOC), will be moving to the U.K. this fall to help lead the research into transgender athletes. The work will be carried out at Loughborough University, through its School of Sport, Exercise and Health Sciences.

It was Harper’s own experience that motivated her to try and track transgender athletes both before and after a gender transition.

Harper, who is originally from Parry Sound, Ont, but is now based in Portland, Ore., has been a competitive runner for decades. When she was younger and racing as a male, her marathon time was a very quick two hours and 23 minutes. But once she started her transition in 2004 and began taking testosterone blockers and estrogen, her pace slowed. 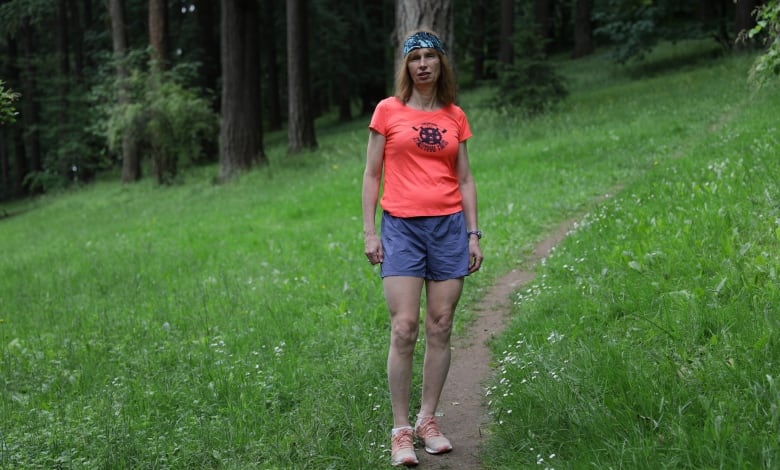 Canadian-born researcher Joanna Harper is leading a study that will be launched in the U.K. this fall, and will track athletes before and after they undergo a gender transition. (Briar Stewart/CBC)

Harper, now in her 60s, still competes, racing alongside women. She wins some events and loses others, which is why she asserts that if trans women can become hormonally like other women, competition can be “equitable and meaningful.”

The difference between male and female testosterone levels can vary widely. Harper says men’s levels can range from eight nanomoles per litre to around 30, while most women have levels that are less than three.

What has become contentious is how to treat athletes whose levels fall outside the average range. Previously, the IOC demanded that transgender athletes complete sex reassignment surgery before competing in the Olympics and other international events, but those guidelines changed in 2016.

The current limit set by the IOC is 10 nmol/L, but that is expected to be cut to five — the level the International Association of Athletics Federations (IAAF) has imposed. 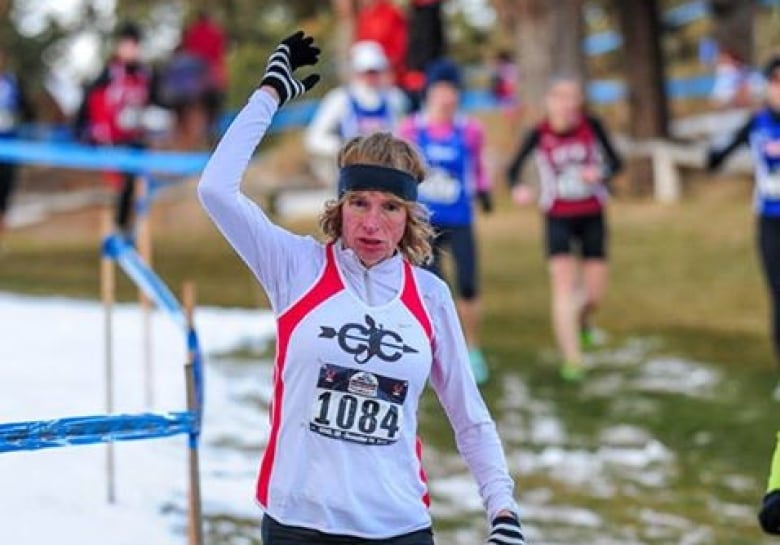 As a competitive runner, Harper says one of her most notable victories came in 2007 at a cross-country championship, when U.S. officials let her race alongside women for the first time. (Joanna Harper)

That rule is being challenged by star South African runner Caster Semenya, who is not transgender but rather was born with an intersex condition, meaning that her anatomy doesn’t fall neatly into the traditional buckets of male or female. As a result, she has much higher levels of natural testosterone.

An openly declared transgender athlete has never competed in the Olympics, even though it has been permitted since 2004. There are several hopefuls vying for a spot at the 2020 Summer Games, which will be held in Tokyo, but none are considered a sure bet for an Olympic spot.

There has been limited research in this area. Harper conducted a small study, published in the Journal of Sporting Cultures and Identities in 2015, which analyzed the race times of eight transgender female runners, both before and after transition.

Collectively, it found that the eight runners had much slower race times after transitioning from male to female, even after adjustments were made to compensate for the change in physical ability that normally occurs due to age. The findings were limited, however, because no actual testing was done and Harper relied on the athletes’ published race times.

For her new study, she will be following between 10 and 20 transgender athletes and working with a few gender clinics in England.

Of particular interest is how a gender transition, involving testosterone blockers and estrogen, affects muscles and the cardiovascular system. It appears trans women go from having the cardiovascular capabilities of man to that of a woman, Harper says, but muscular changes aren’t as complete and likely end up somewhere in between.

“It’s clear that there are enormous changes,” she said. “It’s about nailing down precisely what happens.”

Dr. Stéphane Bermon, the head of the IAAF’s health and science department and a driving force behind its contentious testosterone regulations, said he is supportive of the research being undertaken by Harper.

“Research in the field of exercise physiology of transgender athletes is important and relatively urgent,” he said in an email to CBC News. “We do not have enough data to fine tune eligibility of trans athletes in various sports.”

Bermon also said, however, that maintaining a level playing field is as important as inclusion — and that can only be achieved with “more specific science and a better knowledge of the physiological effects of transitioning.” 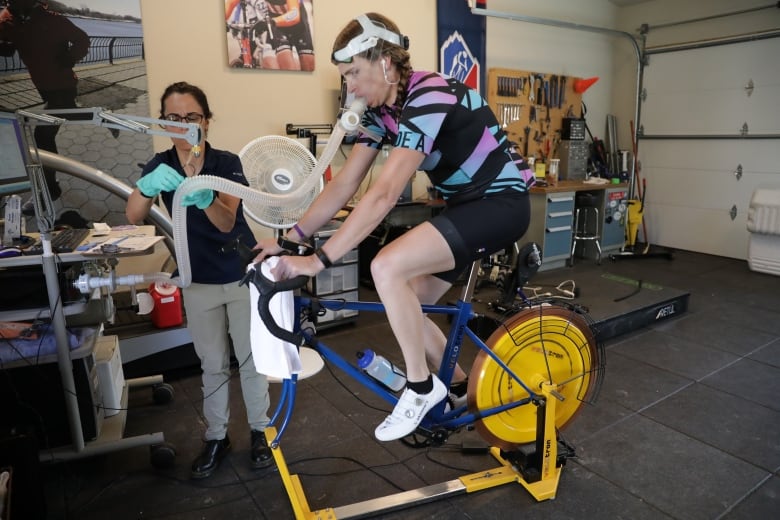 When tests results showed her testosterone level was creeping up, Bearden says she increased the amount of hormone medication she was taking in order to bring it back down. (Briar Stewart/CBC)

At a sports lab in Colorado Springs, Bearden pedalled fiercely on a stationary bike as the resistance level was raised at timed intervals. During one test, she wore a breathing mask to measure her oxygen intake. Her finger was pricked periodically and blood was taken to measure lactate levels.

In many ways, she is the ideal subject; she had one of these tests done before she started transitioning in 2014, so there is baseline data that shows her level of power is down more than 11 per cent.

By giving scientists access to her results, Bearden hopes it will make it easier for transgender athletes to compete in the future. She says it also creates a safer space for her as an athlete, because it proves to her competitors that she is what she describes as “legit” — far below the testosterone limits.

“There are no questions that when I am on that podium, I am there because of any other reason [other] than I am an athlete and I train my ass off every single day,” Bearden said.

While Bearden believes trans athletes need to abide by the current rules, it is a vehemently divisive issue among those in the trans community and the broader public. 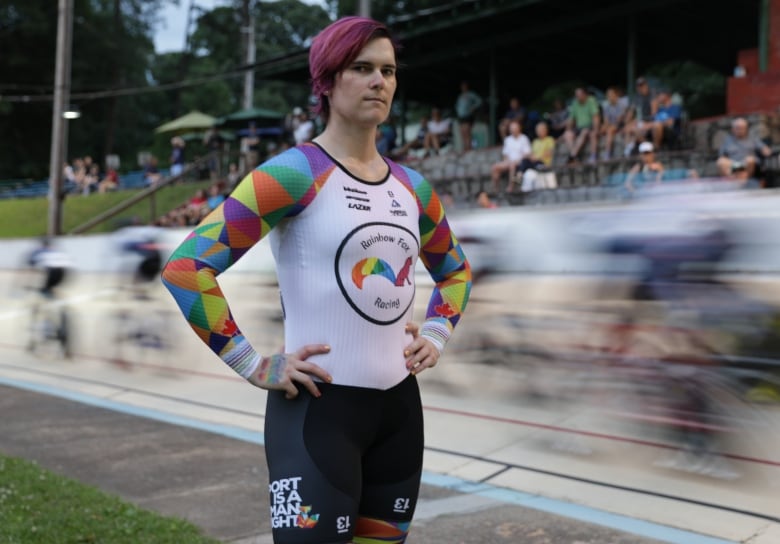 Rachel McKinnon, 37, won a UCI Masters Track Cycling World Championship in 2018. She describes the backlash she received online over being transgender as overwhelming. (Chris Corday/CBC)

Rachel McKinnon, a track cyclist originally from Victoria, found herself at the centre of a political firestorm last fall after she won a world championship race in her age group.

The amount of backlash she received online was so overwhelming, she said, she needed to appoint four people to handle the negative comments on her Twitter feed.

In the past, she posted her test results online because she wanted the public to know her testosterone level was nearly negligible — far below the limits set out for racers.

But she doesn’t believe the hormone is a good metric for deciding who is eligible to race in which category, adding that transgender athletes shouldn’t be required to take hormone therapy.

“No physical policy will ever work,” she said. “They should respect an athlete’s legally recognized sex or gender.” 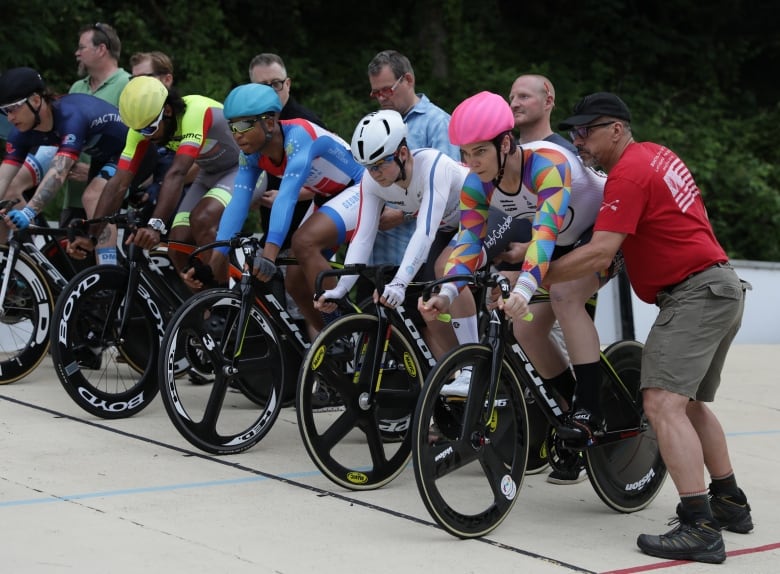 At an early-season track-cycling race in May, McKinnon chose to race alongside the men in one event because they would be tougher competition. She ended up placing well back in the field during that particular race. (Briar Stewart/CBC)

The Canadian Centre for Ethics in Sport takes a similar position in the guidelines it has issued, suggesting sports organizations allow athletes to compete in the gender in which they identify, arguing testosterone isn’t a reliable predictor of competitive advantage.

The issue is not only being discussed by various sporting organizations, but also by high school and university groups.

President of Athletics Alberta Linda Blade says officials are struggling to figure out how to include transgender women in competition without putting other women at a disadvantage.

She believes there should be a separate, open category, pointing out that some sports already have stratified divisions to reflect physical differences, like boxing, where there is a separate category for flyweights and heavyweights.

“If a person has gone through puberty with a full set of testosterone levels that make them taller, and their lungs bigger, and their muscles bigger … they have just an incredible advantage,” she said. 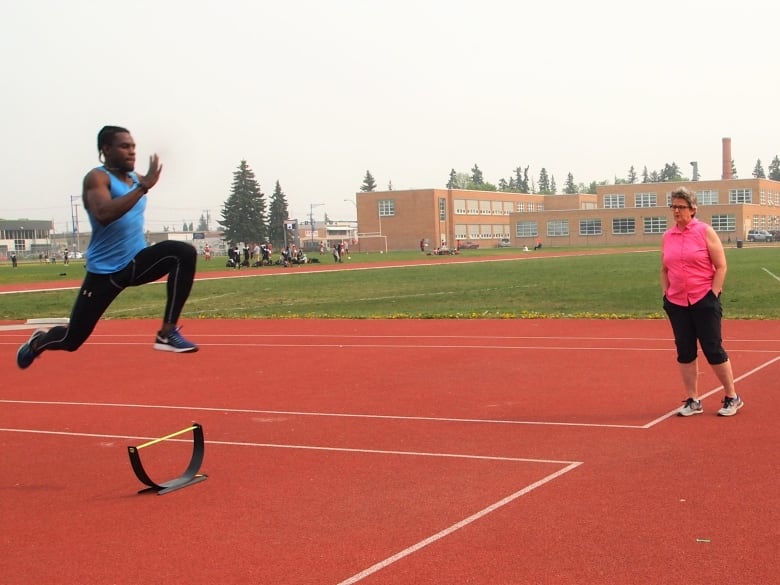 Sport performance coach Linda Blade works with a long jumper in Edmonton. As President of Athletics Alberta, Blade believes many are concerned with how to fairly include transgender athletes in sport. (Briar Stewart/CBC)

Joanna Harper insists that is often not the case. While it is true that men who transition to women won’t lose their height, she said, that is not necessarily an advantage across all sports.

In gymnastics, where Olympic-calibre athletes are petite, Harper says trans women would be at a disadvantage.

She acknowledges it’s a much different scenario in strength-based sports, like powerlifting, which is why she thinks it might be more equitable to have sport-specific rules instead of an across-the-board policy.

“You need to look at the particular abilities and biological characteristics that make one advantaged in the sport and make decisions based on that.”