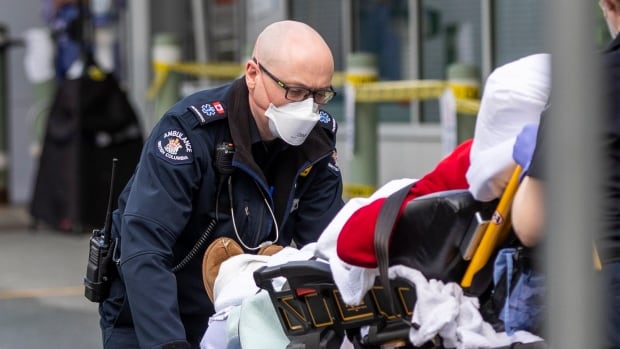 Paramedics across B.C. responded to more calls to help someone who had an overdose in 2020 than any other year since record keeping began, according to dispatchers.

B.C. Emergency Health Services (BCEHS) on Wednesday said they were called to 27,067 overdoses last year — an average of 74 calls every day, or one call around every 20 minutes. The total is up 12 per cent from 2019, according to a statement.

“It’s hard for every paramedic who goes to those scenes,” wrote Pat Hussey, paramedic unit chief in Penticton, which saw an 87 per cent increase in calls last year.

The sobering statistics are further confirmation the COVID-19 pandemic has exacerbated the overdose crisis that has devastated the province for years. The overdose death toll for the year surpassed 1,500 in November, solidifying 2020 as a record-breaking year for lives lost due to a lethally toxic illicit drug supply.

BCEHS said every one of B.C.’s five health regions saw an increase in overdoses last year, except one: Vancouver Coastal Health saw calls drop slightly, by four per cent.

The Downtown Eastside, which has historically seen more than 5,000 overdose calls in a year, saw about 760 fewer calls last year than the year before.

A reason for the drop was not immediately confirmed by the service.

The increases in other rural communities were dramatic, relative to the population.

There were 20 calls for an overdose in Fort Nelson, up 233 per cent from last year. Keremeos and Sechelt saw increases of 167 and 112 per cent, respectively. Terrace and Houston also saw double the number of calls compared to previous years.

The BC Coroners Service said Wednesday it is not yet finished compiling monthly overdose statistics for December, nor has it finished the yearly data for 2020. Those numbers are expected in February.

Even with incomplete annual data, the overdose crisis continues to be deadlier than the disease caused by the novel coronavirus. More than 1,540 people died of an overdose in 2020, compared to 1,090 people who died of COVID-19.

The COVID-19 pandemic has worsened the existing overdose emergency. The supply of illicit drugs bought and sold across the province became more toxic when the U.S.-Canada border closed in March and forced suppliers to find other sources.

Toxicology findings show a larger number of those who died between April and November had extreme concentrations of fentanyl, compared with previous months, according to the coroners service.

Hussey, the paramedic in Penticton, said overdose calls have become more complex with such a high level of drug toxicity. Overdoses require multiple doses of naloxone and patients often have breathing and neurological complications.