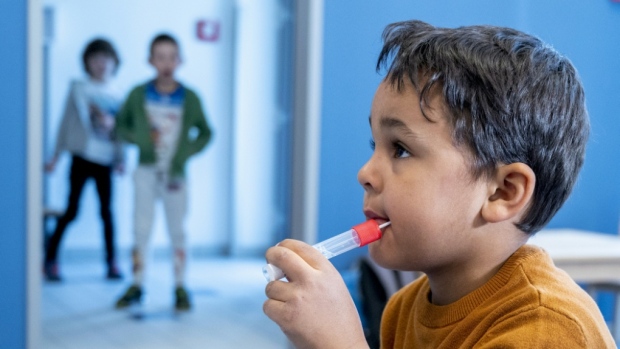 VIENNA — A newly developed, lollipop-shaped coronavirus test is being rolled out in some of Austria’s kindergartens as an alternative for toddlers who don’t take well to throat or nose swabs.

Students — a little shy — lined up in one Vienna kindergarten this week to be tested, with the exercise open to the media.

Though children are exempt from many virus measures, there are fears that with schools and kindergartens reopening, the more contagious variant that emerged in Britain and is dominant in several EU countries could spread more widely among young people and children.

This could contribute to another surge in cases and threaten progress with vaccination campaigns.

To “keep track of the infections” and to offer a “sensible alternative to other testing options,” Austria’s Burgenland province has already ordered 35,000 lollipop tests, a spokesperson for the regional government told AFP.

This follows the success of a pilot project with children in some kindergarten and day-care centres.

Letters have been sent to parents informing them that the Burgenland state will provide each child with three free tests per week.

After initial disappointment that the tests lacked the bright colours and the sweet taste of a real lollipop, instead resembling “an oversized cotton swab”, father and graphic designer Dominik Krotschek says that his three-year-old has now taken well to the tests.

“It’s unproblematic — we just did it again today and it worked well,” Krotschek told AFP.

“I think it makes sense to have stricter controls in the educational sector,” he said.

The tests were invented by Manuela Foedinger, who leads the laboratory at Vienna’s Kaiser-Franz-Joseph hospital and is credited with pioneering a similarly simple-to-use gargle test that is now widely used across the nation of 8.9 million.

When her invention was recognised by the city of Vienna last year, the mayor of Vienna asked what could be done to test toddlers and Foedinger replied: “I have an idea for that, too.”

In Vienna, Foedinger is now conducting a study with children between the ages of one and six across five kindergartens to show just how accurate the test results are and help decide whether lollipop tests can be deployed more broadly, a spokesperson said.