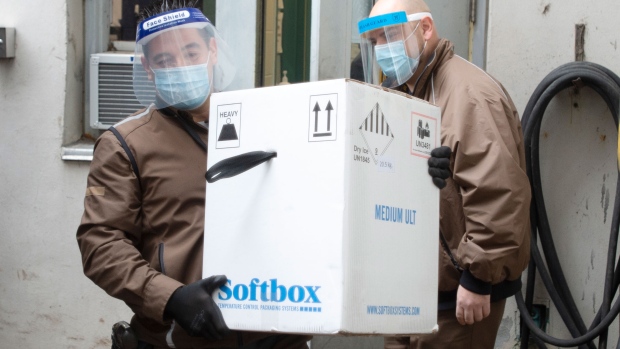 TORONTO — News that Canada is behind other countries in their COVID-19 vaccination rollout schemes – while in a critical point in the pandemic – has experts worried the country won’t meet the September 2021vaccination goal set by Prime Minister Justin Trudeau.

The vast geography of the country, including remote communities where the logistics of flying in healthcare is complicated –as well as tricky storage requirements of the Pfizer vaccine, were initially pointed out as roadblocks to the rollout.

But with the arrival of Moderna’s easier-to-store vaccine, and Health Canada reviewing more vaccine products on the horizon, experts say governments need to shift focus.

“I think there was a lot of attention given to getting vaccines into the freezers, but not enough attention from freezer to arm,” biostatician Ryan Imgrund, who works with Ottawa Public Health, said in an email to CTV News.ca Wednesday.

“They were so worried about the cold storage requirement that they seemingly forgot that the vaccine needs to come out and actually get in to people,” he said.

It was a sentiment echoed by the Dean of health sciences at Queens University and former federal minister of health Dr. Jane Philpott.

“We need to empty those freezers… there’s no point in pacing ourselves on this,” Philpott said on CTV’s News Channel Wednesday. “That’s what really is going to turn this pandemic around, is getting people the vaccine protection they need.”

The federal government released 500,000 doses of both the Pfizer and Modern vaccines back in December, but the actual distribution and rollout of the inoculations is at the discretion of provinces and territories.

Ontario has been criticised repeatedly for its vaccination initiatives having trouble getting off the ground, as the province surpassed 200,000 total COVID-19 cases Wednesday.

The Ontario Liberal party called for the military to be used to step up Ontario’s vaccination phases Wednesday, after Premier Rob Ford’s government took some significant heat for shuttering vaccination stations during the Christmas holidays.

“I am urging the premier to request immediate assistance from the Canadian Armed Forces (CAF) who are well-positioned to provide important logistical leadership and support,” Ontario Liberal Leader Steven Del Duca said in a statement.

Ret. Gen. Rick Hillier, who was tapped by Ford to lead Ontario’s vaccination rollout, admitted that halting vaccinations over the holidays was a mistake, and that the taskforce’s initial scheme of holding back the 35,000 second doses of the Pfizer vaccine also slowed them down.

Now Hillier said the vaccine taskforce plans to administer 55,000 doses of 161 long-term care homes in the regions of Toronto, Peel, York and Windsor-Essex by Jan. 21.

There has been no deadline set for the rest of the province.

Ottawa’s Medical Officer of Health, Dr. Vera Etches announced on Twitter Tuesday that they would begin vaccinating people outside of the Ottawa Hospital – which had been the central distribution hub – and directly into long-term care homes.

Ontario’s Minister of Health Christine Elliot said Wednesday that 60,000 vaccines have been administered in Ontario so far.

The sense of urgency is a good sign, Philpott says.

“I’m pleased to see that over the last 24-48 hours the pace is definitely picking up across the country,” she said. “Ontario is seeing almost a doubling of the rate of vaccines getting out of freezers and into arms, and we need to continue doing that.”

Philpott says she is hopeful that a “significant number” of vaccines will be arriving this week and next week to pick up the pace.

Manitoba opened up a “supersite” for vaccinations in the RBC Convention Centre to better facilitate their first phase of inoculations.

The province is hoping to vaccinate around 40,000 people by the end of January.

Quebec, which had its long-term care homes decimated by COVID-19, took the extra step of putting vaccine distribution centres inside of the homes in an effort to vaccinate residents.

Quebec announced late December that they would hold back on the second dose of the Pfizer vaccine in an effort to widen the round of first doses given out. The sudden change in logistics has prompted the threat of legal action from family members of seniors who are now missing out on their second shot.

Quebec’s Premier Francois Legault is also reportedly mulling over an overnight curfew – a first in Canada, if approved – to help get COVID-19 cases under control.

B.C expects approximately 792,000 doses of the Pfizer and Modern vaccines to be distributed through the end of March.

The province released their updated vaccination plan Monday – which targets populations like seniors living in the community who are at least 80 years old and Indigenous seniors who are at least 65.

The province received approximately 46,000 doses of the Pfizer and Moderna vaccines, and said their continued rollout will depend on the available supply.

Nova Scotia is opening COVID-19 immunization clinics to help achieve its goal of vaccinating at least 75 per cent of the population by the end of September.

The province received a combined 9,550 doses of Pfizer and Moderns vaccines and has been targeting healthcare workers in their Phase 1 rollout which runs from January to April 2021.

How can we fix it?

“A key to maximizing efficiency in these complex logistical operations is minimizing downtime or non-productive time,” said Director of the Centre for Healthcare Engineering at the University of Toronto Professor Timothy Chan, in an email to CTV News.ca Wednesday.

“Retail figured out long ago that inventory sitting on shelves costs them money. The same concept applies here, except now we’re talking lives.”

Chan also criticized the petering out of vaccinations around the holidays.

“COVID doesn’t take a holiday so neither should we,” he said.

“Vaccination schedules should be made weeks before the vaccine touches ground. You can always cancel appointments. But scheduling in new ones is always difficult,” he said.

Philpott also touched on the logistics.

“Everybody has a responsibility here,” she said. “We need to ramp up the mechanisms to make sure they are delivered as quickly as possible to the people who need them.”

Chan says that fixing the problem relies on accurately identifying the “key limiting factors” or “bottlenecks.”

Chan said some solutions lie for provinces opening “several large sites” similar to Manitoba’s super site, adding satellite vaccinate sites in long-term care homes and recruiting the healthcare workers who have been lining up the volunteer to administer them.

“Start a massive scheduling operation to just get people to these sites (or doses delivered to LTC homes) and start administering the vaccine around the clock if we need to,” he said.

For Ontario’s situation, Imgrund said that the province “eventually needs to get to 40,000 vaccinations per day” in order to vaccinate the entire population.

“Phase 1 is the most important phase when it comes to saving lies and reducing hospitalization…It is easier to ramp down in the future than ramp up,” he said.