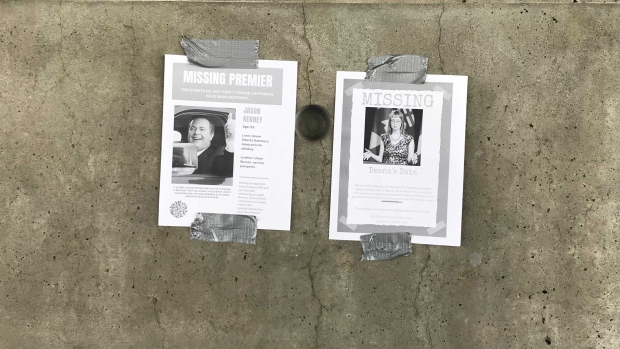 EDMONTON — The Alberta government insists it is keeping the public “appropriately” informed on COVID-19 despite criticism it isn’t.

“We’ve not kept anybody in the dark,” Finance Minister Travis Toews told media on Tuesday, after delivering a fiscal update and deficit less than half of what had been projected. It was an update that touted Alberta’s economic resilience during the pandemic’s early waves and the government’s recovery plan as successful.

It was also the first time in weeks a government minister had taken questions from the press in person.

The reduced visibility of Alberta’s government over the summer – as the premier and health minister vacationed and Alberta Health delivers daily COVID-19 updates online – has been broadly criticized. In Edmonton’s River Valley, missing posters for “Deena’s Data” were hung alongside posters for Alberta’s “Missing Premier.”

On Monday, a group called Protect Our Province Alberta held a press conference to go over the province’s coronavirus trends. The doctors – led by Dr. Joe Vipond, a Calgary physician who was largely behind the successful charge to get the province to keep its test-trace-isolate measures longer – went over Alberta’s most recent COVID-19 data and offered comments on a situation they described as “incredibly concerning” and “frustrating.”

The group said it would to return to YouTube so long as Chief Medical Officer of Health Dr. Deena Hinshaw wasn’t providing updates in person.

Another family physician, Dr. Kate Bisby in Calgary, added, “The vacuum of leadership and knowledge that we’ve had growing over the last three to four weeks is deeply concerning to me and unacceptable.”

Hinshaw was not scheduled to make a public appearance on Tuesday, according to Alberta Health senior spokesperson Lisa Glover.

But, Glover added, “Our Chief Medical Officer of Health and Alberta Health continue to provide data updates Monday to Friday and are closely monitoring the trends in Alberta.”

“We’ve not been silent and I have complete confidence in our chief medical officer of health that she’ll continue to provide the appropriate updates at the appropriate time,” Toews said Tuesday.

Premier Jason Kenney was expected to return to work this week. Some pundits believe his efforts to avoid headlines are somewhat tied to Erin O’Toole’s federal Conservative campaign.

Experts warn the absences are doing more harm then good.

“There are very pressing and legitimate questions that are being raised,” said Mount Royal University political scientist Lori Williams.

“By completely absent from availability for such questions has simply focused more attention on whether this government and its leadership can be relied on.”