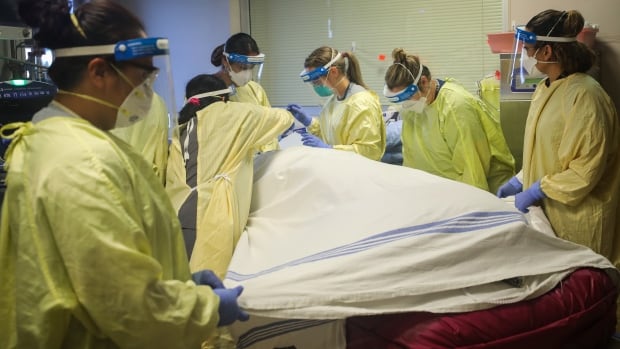 More Albertans in their 20s, 30s, 40s and 50s are ending up in ICU with COVID-19 than ever before, according to a breakdown of data published by Alberta Health.

This comes as case rates have soared among these age groups, most of whom have not yet been vaccinated.

At the same time, new variants have increasingly crowded out older versions of the coronavirus that had been circulating in Alberta last year.

In total, there were 145 patients in intensive care units (ICU) across the province as of Monday, according to Alberta Health, which is nearing the all-time peak of 151 set back in December.

But the people admitted to ICU in recent weeks have been significantly younger than those admitted over the winter, when a devastating second wave of infection swamped hospitals with critically ill patients.

Back then, people in their 60s and 70s made up the bulk of new patients arriving in ICU — but, in recent weeks, they have been surpassed by those in their 40s and 50s.

On average over the past week, nearly six people in their 40s or 50s have been admitted to ICU per day, which is the highest level to date for this age range.

Dr. Lynora Saxinger, an infectious disease specialist at the University of Alberta, says the trend in this age range is especially concerning.

“I think that group is old enough to be at some extra risk of more severe disease,” she said.

The rate among people in their 20s or 30s also reached a new peak in the past week, at nearly two new ICU patients per day.

Younger people are less likely to die of COVID-19, but experts note anyone who is severely ill to the point of requiring hospitalization can be in rough shape for some time, even after they have recovered enough to be discharged.

“There are a large number of long-term health effects from being hospitalized or being in the intensive care unit,” said Dr. Craig Jenne, a professor of microbiology, immunology and infectious diseases at the University of Calgary.

Alberta Health reported seven more COVID-19 deaths Monday; among them was a woman in her 20s, a man in his 40s, and two men in their 50s.

Why more young people are getting seriously ill

Saxinger noted case rates in recent weeks have been rising especially quickly among Albertans aged 20 to 59, so it’s to be expected, to a degree, that their hospitalization rates would also increase.

At the same time, vaccinations have not yet been made as widely available to people in this age range as they have to older Albertans.

As of Monday, most Albertans aged 60 and over had already received at least one dose of COVID-19 vaccine, while most adults under the age of 60 had not.

That compares to average ages of 71 and 60, respectively, in early January, when few Albertans of any age had been vaccinated.

Saxinger noted there have typically been fewer people in the 80-plus age range admitted to ICU throughout the pandemic.

“Because a lot of the burden of disease was in long-term care, there’s quite a number of people whose care plans did not include hospital transfer or, if they included hospital transfer, they did not actually include going to ICU,” she said.

Another factor that has changed since the winter is the arrival of new variants of the virus.

Variants of concern were just starting to be identified in Alberta back in January, but today they account for the vast majority of new cases.

The most dominant variant in Alberta, known as B117, was originally identified in the United Kingdom.

It has been shown to be significantly more transmissible than earlier versions of the virus, and there is emerging evidence that it may be more virulent as well.

“We’ve seen early data, a few weeks ago now, from Ontario suggesting that many of these variants of concern — including the U.K. variant, in particular — have the capacity to make younger people more sick,” Jenne said.

“So, therefore, a greater percentage of younger people who get the virus have an increased risk, unfortunately, of hospitalization or intensive-care-unit admission.”

A note on the data

It does, however, publish a daily tally of the total number of patients ever admitted to hospital and ICU, broken down by age range.

The figures in the first chart in this story come from disaggregating months’ worth of these totals — subtracting one day’s total from the previous day’s — in order to infer the number of new patients admitted to hospital or ICU each day.

The same method was used for the following chart, which shows new daily hospital patients (of all kinds, not just ICU) broken down by age.

You can hover your mouse, click or tap on the lines on these charts in order to focus on one particular age range.

Where there were gaps in the data (due to non-reporting periods during holidays or occasional technical problems that prevented Alberta Health from reporting a day’s figures), new-patient counts were interpolated over the missing days.

There are also sometimes adjustments to the patient tallies, meaning data can be reported in bunches or retroactively revised downward as new information comes in. The figures in these charts are averaged over a period of seven days to help smooth out such fluctuations.