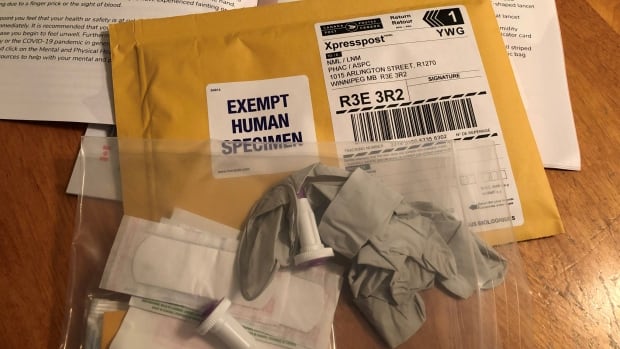 Albertans had a higher rate of COVID-19 antibodies due to a past infection than people in any other province, according to a major national blood survey conducted in early 2021.

The Canadian COVID-19 Antibody and Health Survey involved mailing tens of thousands of testing kits to people across the country.

Respondents were asked to use the kits to poke their fingers, collect a sample of their own blood, and return the sample by mail for testing at the National Microbiology Lab in Winnipeg.

The samples were tested for the presence of coronavirus antibodies — blood proteins created by people’s immune systems in response to the virus that can help them fight off future infections.

Participants were also asked to indicate their vaccination status to help researchers differentiate between antibodies from natural infection versus vaccination.

The survey ran from November 2020 to April 2021 but the bulk of the collection was done in January and February.

As such, it doesn’t offer a current estimate of COVID-19 antibodies but rather a snapshot of a period of time, largely this past winter.

Based on the blood-test results, Statistics Canada estimates that four per cent of Albertans had antibodies due to a past COVID-19 infection. (This estimate comes with a confidence interval of 2.6 per cent to 5.7 per cent, meaning the true proportion will fall in that range 95 times out of 100.)

That compares with a national rate of 2.6 per cent (with a confidence interval of 1.6 per cent to 3.2 per cent.)

The survey is seen as the most comprehensive study, to date, of immunity due to natural infection in Canada.

“This study is really unique in the fact that it’s able to provide statistically reliable data on the prevalence of antibodies in a representative sample of Canadians across the country,” said Peter Jiao, the head of Statistics Canada’s COVID-19 data team.

“And so the survey results, they’re going to be used by public health authorities and researchers to better understand how the virus has spread through the population.”

The number of actual COVID-19 infections has always been believed to be higher than the number of confirmed cases, because testing has not always been widely available and, even when it was, some people may not have known they were infected or did not seek testing for other reasons.

But the new data suggests the number of undiagnosed infections is actually lower than many had previously thought.

In April, Kenney said the provincial government believed 10 per cent of Albertans had immunity to COVID-19 due to a past infection.

The following month, he said it was even higher.

“We estimate that about 14 per cent of Albertans have a degree of immunity through antibodies acquired through prior natural infection,” Kenney said, in announcing the province’s “Open For Summer” plan in late May.

The blood-survey study period didn’t catch all of Alberta’s third wave of COVID-19 in the spring, but the new data still suggests the province’s estimates were likely on the higher end, said Craig Jenne, a microbiology and infectious disease professor at the University of Calgary.

“Fewer people in the community are protected than perhaps were included in the initial modelling about when it’s safe to lift restrictions,” he said.

“So it’s probably a very strong warning that we have to be careful moving forward — that the potential for larger outbreaks to exist is still there — and we have to do our best to try and limit that spread.”