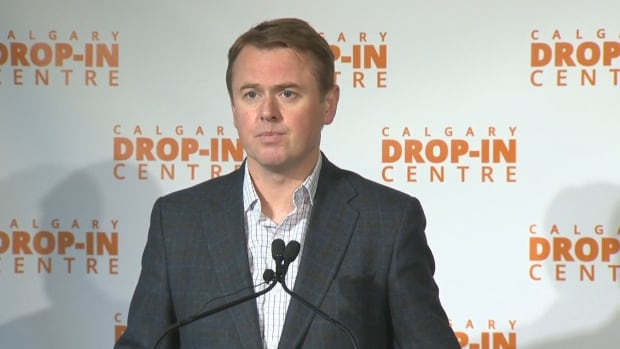 Shandro said expanding a pilot program around rapid testing will reduce the strain on centralized laboratory services and help health officials better contain the spread of the virus, which has now surpassed 20,169 active cases in Alberta and continues to strain frontline health-care services.

The province has received more than 800,000 rapid tests from the Public Health Agency of Canada and the stockpile will best used on populations most vulnerable to the virus, he said.

Rapid test kits will first be deployed to long-term care facilities and designated supportive care facilities in Edmonton that are contending with outbreaks, Shandro told a Thursday morning news conference at the Calgary Drop-In Centre.

Mobile testing centres are expected to be deployed to long-term and supportive facilities in the Calgary health zone starting on Monday, with sites under outbreak status being granted top priority.

Testing in long-term care and designated supportive living facilities outside Edmonton and Calgary zones is expected to follow shortly thereafter, he said. Care facilities in both cities have been particularly hard hit by the virus, with many care centres struggling with deadly outbreaks among their residents.

The rapid tests will be used on patients who are within the first week of showing symptoms. The swabs need to be taken by a health professional.

“We’ll be using the Abbott Panbio antigen test, which is very accurate when it’s used on people who have had symptoms for less than seven days,” Shandro said.

“It means that we can identify positive cases within hours.”

Rapid tests will also be deployed to 25 hospitals across the north, south and central health zones at sites that currently have to ship their samples to centralized labs in Edmonton and Calgary, Shandro said.

“This is rural hospitals from Cardston to Pincher Creek, from Cold Lake, St. Paul and Peace River,” he said.

“These new sites were chosen based on their location in rural and remote communities, based on transport time to a lab that processes rapid tests, the volume of tests required and the population’s need for them.”

More than 1,000 people have received the rapid tests at assessment centres and hospital locations to date, including 76 positive cases who were notified about their result in a matter of hours, Shandro said. Since March, the province has completed a total of 2.5 million tests for COVID-19 on more than 1.5 million people.

Expansion of the rapid-testing clinical pilot began during the week of Dec. 7 with testing at the Calgary Drop-In Centre and an isolation facility in Edmonton. Staff nurses have been trained to use the systems with homeless shelter clients who are difficult to reach through the existing COVID-19 testing program.

Work is underway to bring the systems to more homeless shelters in urban and rural locations in the coming weeks, the province said in a news release.

Sandra Clarkson, executive director of the Calgary Drop-In Centre, said the tests have proved “incredibly valuable” at the downtown facility, which experienced an outbreak among its clients in September.

“The homeless-serving sector, including the drop-in centre, have experienced outbreaks — no differently than any other congregate or close community settings across the country,” Clarkson said Thursday.

“The opportunity to access the rapid testing is another powerful tool in our toolkit of care to help our clients and our staff.

“Rapid testing at the Calgary Drop-in Centre will mean that we can even better support clients who are symptomatic or close contacts, and help them to isolate more quickly. I am optimistic that this rapid testing will help us reduce the spread [in] this vulnerable population group.”

Rapid tests can deliver results in 20 minutes, unlike the standard polymerase chain-reaction (PCR) test, which can take hours or days.

The rapid tests are not as reliable as PCR tests, but Dr. William Stokes, a medical microbiologist with Alberta Health Services, said they have proven to be effective.

“What we found with this work is that these rapid tests are effective in identifying positive COVID-19 cases, especially in people with symptoms and signs of COVID-19 infection,” he said.

“Speeding up the identification of positive COVID-19 cases using these rapid tests is important to contain the spread of virus in our communities.

“It will also help alleviate some of the pressures that we face at the provincial laboratory with these positive samples, and this will have even more importance as we roll out more and more of these tests across the province.”

Last month, the province announced a pilot program for point-of-care rapid tests at COVID-19 assessment centres in St. Paul and Slave Lake, as well as one centre in each of Edmonton and Calgary.

Alberta had obtained 577,000 Abbott ID NOW and Abbott Panbio COVID-19 testing kits and began rolling them out this month at several sites in the province. The Panbio tests are antigen-based tests, while the ID NOW is a molecular test.

According to a government news release last month, swabs will be collected from each patient tested and all negative tests will be subject to confirmation by a polymerase chain reaction (PCR) test, which detects the genetic material of the virus.

Health Canada has authorized rapid tests as a “point-of-care” tests, meaning they can be used only by trained professionals in pharmacies, walk-in clinics or doctors’ offices.

The rapid tests can be simple to administer, requiring a nasal swab and a small container of testing material, and they can produce results in as little as 15 minutes. The technology is very similar in operation to familiar home pregnancy tests.

A positive antigen test result is considered accurate when instructions are carefully followed, but there’s an increased chance of false-negative results.