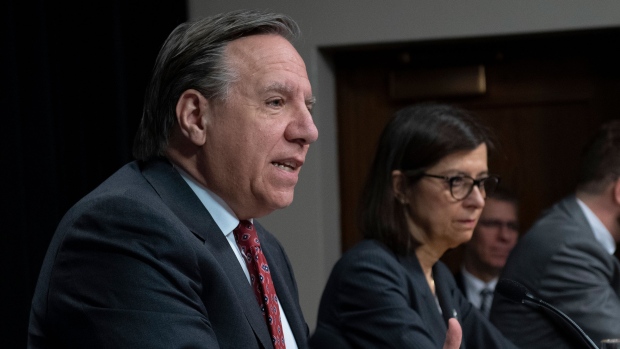 The number of absent workers jumped by 800 from just a day earlier, Legault said, noting that those absences are proving difficult to fill and are causing a strain on the health network, particularly in the province’s embattled long-term care facilities for seniors, or CHSLDs.

While a substantial number of those workers have been infected with COVID-19, Legault said some 5,500 absent workers have not been infected and are staying home because they are afraid of becoming infected or for other unspecified reasons.

“We need you,” Legault pleaded to the missing workers, while announcing that temporary pay increases – which range from four to eight per cent depending on a health-care worker’s role – will be extended through May 31.

Legault also pushed the concept of “herd immunity” on Thursday as he prepared to lay the groundwork next week for a plan to gradually restart the economy and get children back to schools.

The approach would involve exposing a large proportion of Quebecers to the novel coronavirus in a measured, gradual way, to help them develop a natural immunity.

The idea of reopening schools has garnered an unfavourable response among some parents, teachers and unions, who worry about kids returning to class just weeks after physical distancing and stay-at-home measures were enacted to slow the spread of COVID-19.

But Legault argued Thursday that less than 10 per cent of the province is currently naturally immune to COVID-19 — perhaps a bit more in hard-hit Montreal — and that number won’t change unless the province starts resuming certain activities.

“The idea is to go very gradually so that people who are less at risk can develop antibodies to be able to become immune,” Legault said.

There are now 1,243 people who have died of COVID-19 in Quebec, health authorities announced Thursday, as confirmed cases in the province reached 21,838.

There are 1,411 people being treated for COVID-19 in Quebec hospitals as of Thursday, up 133 from the 1,278 reported Wednesday. Of those in a hospital, 207 are in intensive care, up only eight from the 199 reported 24 hours earlier.

The number of people in Quebec who have recovered from COVID-19 as of Thursday was 4,484, up 193 from the 4,291 recoveries reported a day earlier.

With 10,375 confirmed cases, Montreal remains the epicentre of COVID-19 in Quebec; you can see a map breaking down COVID-19 by provincial region here.

Legault stressed that the situation in long-term care homes — which accounted for 93 of the additional deaths Thursday — is much different than the rest of the province, which has had more stable figures.

In the province, 97 per cent of COVID-19 deaths are among people 60 and older. Public health officials have said children are very low-risk and tend not to develop severe symptoms from COVID-19, so letting them get the virus and gain immunity would have an impact on the rest of the province’s population.

– The Canadian Press contributed to this report